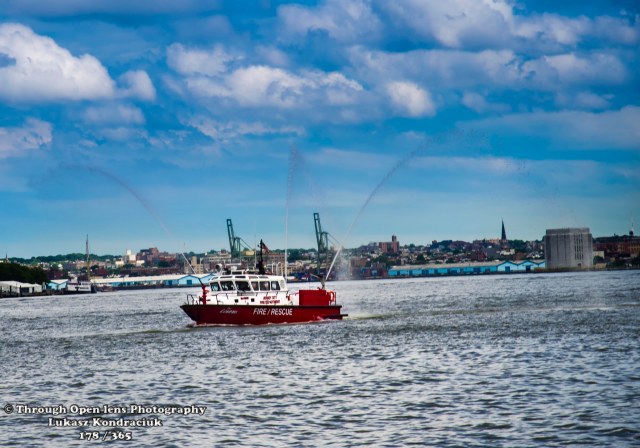 Why do firemen wear red suspenders?

To keep their pants up.

Interesting Fact: The first recorded[citation needed] fire-float was built in 1765 for the Sun Fire Insurance Company in London. This was a manual pump in a small boat, rowed by its crew to the scene of the fire. A similar craft was built in Bristol by James Hillhouse for the Imperial Fire Insurance Office in the 1780s. All fire fighting in Bristol was carried out either by private insurance companies or the Docks Company until the formation of the Bristol Fire Brigade as a branch of the police in 1876. In New York City, a small boat with a hand-pump was used to fight marine fires as early as 1809.[4] By the middle of the nineteenth century, self-propelled steam-fire-floats were beginning to be introduced. The FDNY leased the salvage tug John Fuller as the city’s first powered fireboat in 1866.[4] Prior to the “John Fuller”, as early as the late 1700s, the FDNY used hand-pumpers mounted to barges and large rowboats. The first purpose built steam driven boats were introduced by Boston Fire Department (William F. Flanders) and FDNY (William F. Havenmeyer) in 1873 and 1875 respectively. The first European fireboat to appear in Bristol was the Fire Queen, built by Shand Mason & Co., London, in 1884 for service in the city docks. The 53 ft. (16.61 m.) long craft was equipped with a three-cylinder steam pump supplying two large hose reels; one of these was replaced with a monitor, or water cannon, in 1900. Fire Queen served until 1922. ( https://en.wikipedia.org/wiki/Fireboat )