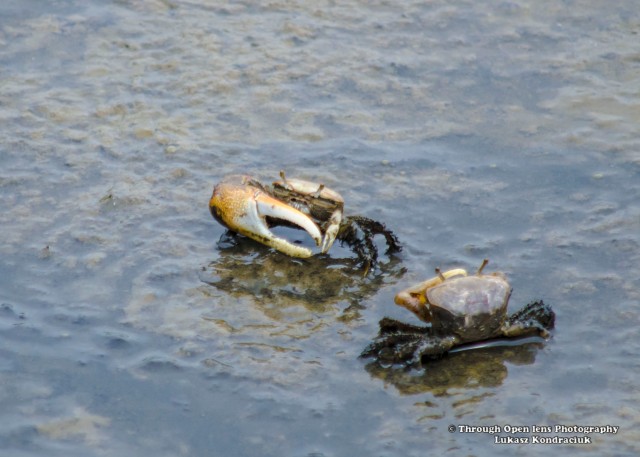 A lonely female crab was walking down the beach one evening when she noticed a male crab coming toward her—but he was walking straight and not sideways!
Impressed by his talent, she decided to marry him immediately.
The next morning she noticed him walking sideways like any ordinary crab! She asked, “What happened? Yesterday you were able to walk straight!”
He answered “What?! I can’t get that drunk every day!”.

Interesting Fact: Male versus male competition also occurs as fighting with the major claws.[9] If a male loses his larger claw, the smaller one will begin to grow larger and the lost claw will regenerate into a new (small) claw. For at least some species of fiddler crabs, however, the small claw remains small, while the larger claw regenerates over a period of several molts, being about half its former size after the first molt. The female fiddler carries her eggs in a mass on the underside of her body. She remains in her burrow during a two week gestation period, after which she ventures out to release her eggs into the receding tide. The larvae remain planktonic for a further two weeks.  ( https://en.wikipedia.org/wiki/Fiddler_crab#Life_cycle )