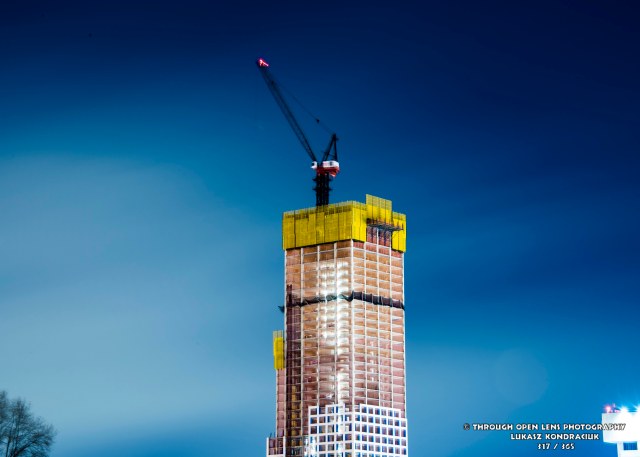 There were three workers; one crane operator, one pole climber, one guide.
The guide tied the crane to the end of a pole. The crane operator would then pick the pole up on end. The climber climbed to the top and dropped a tape measure which the guide promptly read and noted the measurement. The crane operator then lowered the pole to the ground and repsitioned to pick up another pole.
This went on several times when the foreman came over and asked why they couldn’t measure the poles while they were laying on the ground?
The worker replied, “we need to know how tall the poles are, not how long”.

Interesting Fact: It is assumed that Roman engineers lifted these extraordinary weights by two measures. First, as suggested by Heron, a lifting tower was set up, whose four masts were arranged in the shape of a quadrangle with parallel sides, not unlike a siege tower, but with the column in the middle of the structure (Mechanica 3.5).[6] Second, a multitude of capstans were placed on the ground around the tower, for, although having a lower leverage ratio than treadwheels, capstans could be set up in higher numbers and run by more men (and, moreover, by draught animals).[7] This use of multiple capstans is also described by Ammianus Marcellinus (17.4.15) in connection with the lifting of the Lateranense obelisk in the Circus Maximus (ca. 357 AD). The maximum lifting capability of a single capstan can be established by the number of lewis iron holes bored into the monolith. In case of the Baalbek architrave blocks, which weigh between 55 and 60 tons, eight extant holes suggest an allowance of 7.5 ton per lewis iron, that is per capstan.[8] Lifting such heavy weights in a concerted action required a great amount of coordination between the work groups applying the force to the capstans. ( https://en.wikipedia.org/wiki/Crane_(machine)#History )