Merry Christmas And Happy Holidays To All

What did the Christmas tree say to the ornament?

Interesting Fact: In the Early Middle Ages, Christmas Day was overshadowed by Epiphany, which in western Christianity focused on the visit of the magi. But the medieval calendar was dominated by Christmas-related holidays. The forty days before Christmas became the “forty days of St. Martin” (which began on November 11, the feast of St. Martin of Tours), now known as Advent.[83] In Italy, former Saturnalian traditions were attached to Advent.[83] Around the 12th century, these traditions transferred again to the Twelve Days of Christmas (December 25 – January 5); a time that appears in the liturgical calendars as Christmastide or Twelve Holy Days. ( https://en.wikipedia.org/wiki/Christmas#History )

What do you call a kid who doesn’t believe in Santa?

A rebel without a Claus!

Interesting Fact: Santa Claus is generally depicted as a portly, jolly, white-bearded man—sometimes with spectacles—wearing a red coat with white fur collar and cuffs, white-fur-cuffed red trousers, red hat with white fur, and black leather belt and boots and carrying a bag full of gifts for children. This image became popular in the United States and Canada in the 19th century due to the significant influence of the 1823 poem “A Visit from St. Nicholas” and of caricaturist and political cartoonist Thomas Nast.[2][3][4] This image has been maintained and reinforced through song, radio, television, children’s books, films, and advertising.  ( https://en.wikipedia.org/wiki/Santa_Claus )

It was Christmas and the judge was in a merry mood as he asked the prisoner, ” What are you charged with? ”

“That’s no offense”, said the judge. “How early were you doing this shopping?”

“Before the store opened.”

Interesting Fact: The custom of giving gifts to relatives and friends on a special day in winter probably began in ancient Rome and northern Europe. In these regions, people gave each other small presents as part of their year-end celebrations. In the United States and England, children hang stockings on their bedpost or near a fireplace on Christmas Eve, hoping that it will be filled with treats while they sleep. In Scandinavia, similar-minded children leave their shoes on the hearth. This tradition can be traced to legends about Saint Nicholas. One legend tells of three poor sisters who could not marry because they had no money for a dowry. To save them from being sold by their father, St. Nick left each of the three sisters gifts of gold coins. One went down the chimney and landed in a pair of shoes that had been left on the hearth. Another went into a window and into a pair of stockings left hanging by the fire to dry.  No one was really in the habit of exchanging elaborate gifts until late in the 1800s. The Santa Claus stories of giving gifts to good children, combined with an amazing retailing phenomenon that has grown since the turn of the century, has made gift giving a central focus of the Christmas tradition. ( http://www.thehistoryofchristmas.com/trivia/gifts.htm ) 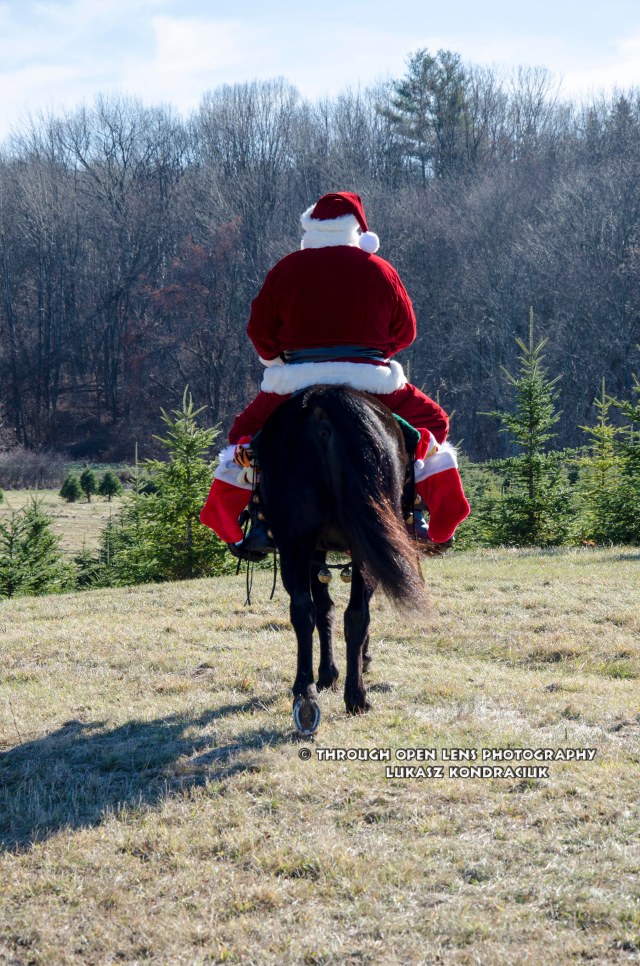 Santa keeps his reindeers resting all year long, so they have enough energy for that one special night of the year. But in the meantime, he checks up on everyone while riding his special stallion. Be aware-SANTA IS WATCHING YOU!!!

Things other countries leave out for Santa (or his non-union equivalent), according to Wikipedia:

in Britain and Australia, he is sometimes given sherry or beer, and mince pies instead. In Sweden and Norway, children leave rice porridge. In Ireland it is popular to give him Guinness or milk, along with Christmas pudding or mince pies.